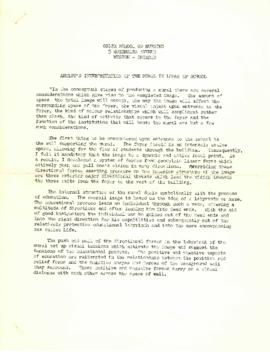 File consists of an explanation of a public artwork created for the new Campus by Toronto artist Dennis Cliff. A picture of the artwork can be found in "Transitions: A Short History of Osler Campus Humber College of Applied Arts and Technology" by Helen Miller.

Series consists of photographs depicting events from Humber between 1969 and 1970. The series includes photographs of instructors and students, construction projects, and other subjects.

File consists of a report on a proposed five year plan. The abstract reads: "This preliminary report sets out a five year plan based on current and projected operations of Humber College's seven academic divisions and related administrative services. Prepared as a first draft for review and study by the Humber College Board of Governors, this document is not an official publication of the College."

File consists of computer print out reports submitted along with the five year plan, mainly outlining enrollment, space use, budgets, and other statistical information.

File consists of a five year plan submitted to Queen's Park by the College, outlining goals and challenges.

Series consists of candid photographs, taken between 1973 and 1974, primarily of the North Campus. Includes photographs of construction, events, staff/students, and the activities of the Instructional Materials Centre (IMC).

File consists of two documents relating to the 1973-1979 five year plan. One is a narrative report, and the other is a computer printout of supplementary statistics.

Series consists of photographs, taken between 1975 and 1976, primarily of the North Campus, and features photographs of campus, staff, students, and other subjects.